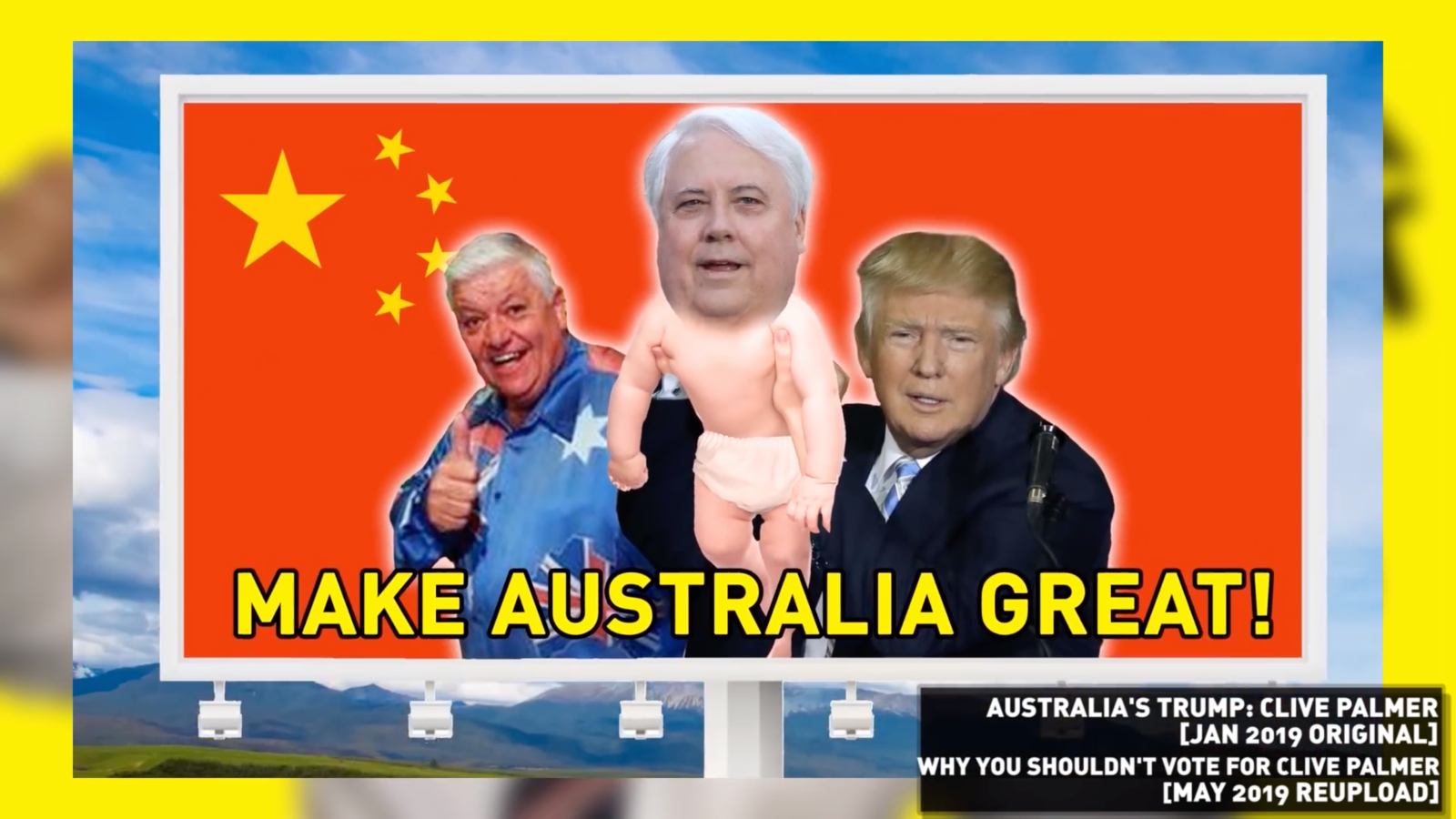 Clive Palmer, an Australian billionaire often called the Donald Trump from Down Under, is threatening to sue YouTuber Friendly Jordies for defamation. The popular YouTube personality and comedian, whose real name is Jordan Shanks, posted a video with the threatening letter he recently received from Palmer’s attorney which, among other things, claims that Palmer was defamed because the YouTuber called him “Fatty McFuckhead” and a “dense Humpty Dumpty.”

Palmer, worth an estimated $2.7 billion ($4.09 billion Australian), also takes issue with photoshopped images that Shanks has created for his videos, including a cartoon of Palmer’s head on Homer Simpson, and another of Palmer’s head on a baby. The baby in the photoshopped image is being held by President Donald Trump because Shanks said that Palmer looks like the “lovechild of Donald Trump and Big Kev.” Big Kev was a popular entrepreneur in Australia whose face appeared on cleaning products in the 2000s.

Shanks posted a video to YouTube on Monday, simply titled “fatty,” laying out the contents of the letter that he received from Palmer’s attorney. The letter takes issue with the times in which Shanks has called Palmer a “crackpot,” a “nutty turd who pretends to be Australian,” and “a walking meme.”

“You do realize that for a defamation allegation to be successful, it has to be proven I lowered your standing in the eyes of the public?” Shanks says in the 25-minute video dissecting all the ways in which he believes it’s basically impossible to actually defame Palmer.

As for Palmer being a “walking meme,” Shank points out that Palmer even created a mobile video game where the billionaire is literally a walking meme. Shanks wasn’t even being hyperbolic.

Shanks did offer a couple of apologies in the video, the first for getting a minor factual error wrong about a lawsuit that Palmer was involved in that turned out to be a civil rather than criminal lawsuit. Shanks also apologized in the new video for photoshopping Palmer to look like Homer Simpson, noting that his personality is much closer to Eric Cartman from Comedy Central’s South Park.

The letter from Palmer’s attorney demands $500,000 as well as legal fees. Apparently the lawyer sent a follow-up letter that even demands the comedian stop mentioning Palmer in any public capacity, according to the Australian YouTuber. But Shanks repeatedly says that he’s not afraid of being sued because his generation doesn’t have much to lose in the way of assets, unlike Palmer’s generation. And as someone who’s grown up on the internet, he’s just speaking the language of the internet.

“This Macbook’s my mum,” Shanks says. “I’ve been desensitized to the emotional needs of others, and as such I’m your worst nightmare. I’m a robot with nothing to lose.”

Shanks is now selling t-shirts on his website that say “Clive Palmer is a Fatty McFuckhead” and says that he can’t be sued because he put in very small text at the bottom of the shirts, “in my opinion.” The t-shirts come in both censored and uncensored versions. Shanks ends his latest video with a montage of Australians saying that Clive Palmer is a “Fatty McFuckhead.”

Gizmodo emailed Shanks to ask if he had been served with a lawsuit yet or if he’d only gotten a letter saying that Palmer intended to sue. Shanks responded with the email below:

It’s an intention to sue. He wanted me to come to “reasonable amends” ie sign an agreement to never speak about him publicly ever again.

It’s now up to Fatty McFuckhead if he wants to take it further. Seeing as he cites litigation as his hobby in life (what an exceptional human being. Using his wealth for the noble act of philanthropy….for himself)

I won’t be surprised if he does.

An email to Clive Palmer’s campaign website was not immediately returned. But we’ll be keeping an eye on this case. If anything, it seems like a great example of the Streisand Effect. Because now more people than ever know that Clive Palmer is a Fatty McFuckhead.